In Which Belgium Is Different From Montana

This is a random list of random little things I’ve been noticing that strike me as extremely odd when I see or notice them. Sometimes it takes me a while to notice them, like this first one:

There are very few front porches. Many houses are flush with the pavement or have a couple of steps up to the door and nothing else.

Most houses are made of brick, and people still lay it by hand. 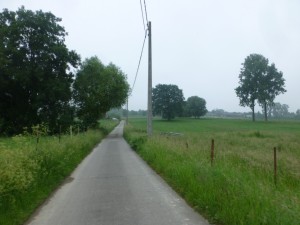 Streets are extremely narrow. Many a normal street is barely as wide as a typical Montanan alley.

I have seen very few potholes in my frequent biking, not like the ones you get in Missoula. Cobblestones, however, are brutal to bike over.

Cars are new and well-maintained. You almost never see old clunkers, or even cars more than five or ten years old.

Cars are also extremely small. You see a few vans, station wagons, and pickup trucks, but they are very much the exception. The average car is much smaller than the average car in the U.S. I did see a Subaru Forester once and stared at it in a bit of befuddlement. It’s such a Missoula sort of car.

Horse meat. In the grocery store. I haven’t tried it yet, but I’m going to. I have eaten duck, kangaroo, quail, and various new kinds of fish here.

There are no deer! I bike past fields and along rural farm roads which, in Montana, would have deer or antelope or something bouncing across them all the time, but there are none. The closest I get are burros in fields. Yes, actual burros.

Burros and/or donkeys in a field

On the other hand, the birds never stop singing. Apparently no one told Belgian birds that they’re supposed to fly south for the winter.

Speaking of toilets, there are very few automatic toilets or sinks.

Speaking of toilets, you have to pay to use them in public. Usually 35-50 cents.

Nearly every set of stairs I have encountered is some variation on a spiral.

You often have to bring or buy your own kitchen appliances like stovetops and things when you move into a new place you’ve rented. All I had to buy was a refrigerator.

There are still plants growing in the fields. Until November or even the beginning of December there were still flowers blooming. So weird.

Everywhere you look, there’s a marvelous castle or old church. Belgium has more castles per square kilometer than any other country in Europe. 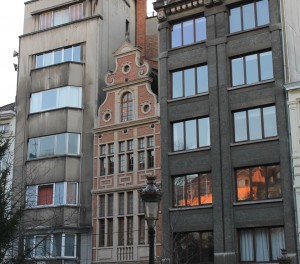 Buildings crammed together in Brussels.

Belgium has more everything per square foot than anywhere in Montana. By this I mean that everything is extremely close together. Villages are only a mile or two from each other. There’s a farmhouse on every hill. Houses are often tall and narrow and squished up against each other (even in villages). Major towns and cities are ten or fifteen miles from each other. There are no wide open spaces.

Most buildings are made out of brick, especially houses and apartments. People still lay brick by hand, with a trowel.

People kiss each other. All. The. Time. You haven’t seen somebody since yesterday? You kiss him on the cheek. You just met a new acquaintance? You kiss her on the cheek. Actually you kiss the air near their cheek. Once, in my first month here, I was at a French friend’s house for dinner, and someone I was unacquainted with was coming late from work. He came in and, since I was sitting closest to the door, came straight to me and stuck his face out at me. I had a momentary recoil of horror (What are you doing?), and he had a momentary recoil of rejection (What a rude person!), and everyone at the table burst out laughing and kindly explained to me that he was French and expected a greeting kiss on/near the cheek, the way an American would shake hands, and explained to him that I was American and new and wasn’t used to strange men sticking their faces in my personal space. We also ended up laughing at each other/ourselves.